The Age Digital Edition as a continuation of the Fairfax Newspaper Project with the The Age and SMH Digital Editions, has been a remarkable project in many ways. This post revisits some of the Digital Editions major milestones throughout the incredibly long lifecycle of this project up to the latest iteration as iPad editions.

The Age Digital Edition started life as part of the Fairfax Newspaper Project back in 1994 as a hybrid MAC/PC CD product and is one of the longest running projects of its kind. Over that period, the product underwent many changes both in technology, design and marketing .

As a bit of disclosure, I have had a very long association with Fairfax Media throughout my career both at AAV Business Communications and at Smedia. I managed the Fairfax Newspapers project both as CD and Digital Editions products from just after its inception in 1994 to 2009.*

In 1994 CDROM was king. It was the era of Windows 3.1 and Mac OS7. The World Wide Web was in its infancy and corporate electronic messaging (e-mail) was starting to become a killer application. Netscape Navigator was just released and the web was taking off despite the very slow download speeds. Interestingly, “digital publishing” was then still referred to as “electronic publishing” and “digital editions”  were known as “electronic publications“. 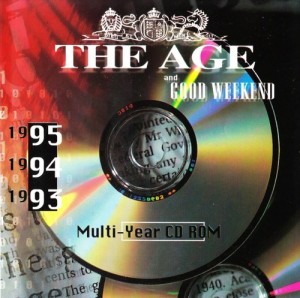 The then Fairfax Library Manager Diana Perkins and her counterpart in Melbourne Sybille Norris commissioned AAV Business Communications to produce a CD version of their respective mastheads including The Age, The Sydney Morning Herald, The Financial Review and the Business Review Weekly.

Senior AAVBC developer David Grigg at the time, scoped the project, selected the Folio Views 3.1 platform and developed the necessary conversion tools to publish the newspapers on CD. Folio Views had an incredibly fast indexing and text retrieval system as well as providing a clean presentation of content.

The 3 individuals above deserve a lot of credit for making this project a reality. They probably did not imagine that the project was going to last as long as it has and change from a purely text based CD to an image heavy online digital replica. Incidentally, Sybille Norris also deserves a special mention for initiating the first AGE website in April 1995, the first newspaper website in Australia.

The “electronic editions” were designed to be extremely easy to use and provided a valuable resource and archive in the days before many web based solutions had fully matured. The discs were a very big hit with schools, universities and libraries and proved very profitable in the early years.

The production itself  involved a workflow of over 60 steps from start to finish. It required data manipulation tools to manage, extract, clean and sort the articles supplied by Fairfax before being converted to a suitable mark-up format for use with the “Folio Views” text retrieval system. The conversion tools needed to be flexible enough to support different source file formats from the original Fairfax Newslink system to the DC5 system used today.

It is quite instructive to look back at the incredibly basic system requirements in those days:

The pace of change in business and IT over that time is nicely illustrated by the many changes of ownership of the then Folio Corporation:

Amazingly, the Folio Views software has been bought and updated by Rocket Software. and is still available to this day.

From Electronic Edition to Digital Edition

In 2006, with the product’s usefulness and popularity quickly waning, the project needed a major update if it was to survive. Having delivered a few Olive Digital Edition solutions from 2002 onwards, these earlier projects proved to be  the perfect case studies for Fairfax to follow. It made a lot of sense to switch the Fairfax Newspapers products from CD to a digital replica.

The digital edition format for newspapers was still quite new at that time, especially with the underlying XML technology. The first Olive Digital Editions project in this region was launched by Allied Press NZ. Shaun Dail from Olive Software secured the project which was later followed by The Star Malaysia and The West Australian and few more, before and after the Fairfax Digital editions.

The switch to digital edition replicas proved to be the key to a successful continuation of the project. The product found a new lease of life online and thereby greatly extended its overall lifetime value.

A special mention here needs to go to Dean Leith, the then Fairfax Information Services Manager and Brett Curtis, the then Syndication Manager. Throughout their tenure at Fairfax, dealing first with AAVBC and then with Smedia, they were open to new ideas and initiatives which resulted in CD Archive products, design updates and marketing  changes and of course the first version of the Fairfax Age and SMH Digital Editions. Dean Leith was also behind one of the first commercial newspaper microfilm digitisation projects in Australia, The SMH Archives from 1955-1995.

Another mention needs to go to George Papdan from papdan.com who was responsible for developing online tools such as a dedicated CRM website, which helped facilitate the sales process, distribution and fulfilment services for CDs. The addition of a content download facility, allowed users to access monthly content updates instead of waiting for quarterly releases of the CD. The addition of a custom subscription system made it possible for publishers to sell subscription packages to their digital edition products.

So what are the lessons that can be learnt from a long term project like this?

The importance and value of adapting to the changing marketplace by keeping a product up to date, relevant and fresh. It needs staying power, it needs technical expertise, it needs business expertise and it needs talented, dedicated and passionate people who love what they do. Finally no matter what the delivery platform might be, from CD to Web to iPad, the value of the product is and has always been the quality editorial content from the Fairfax mastheads.

As a former custodian of this project, I’d like to finish by showing my appreciation and give credit to all the many talented and dedicated people who have made this project remarkable in whatever big or small contribution they might have made.

This is an incomplete list of the people involved in this project:

The road ahead for digital editions in general has become a whole lot more complicated as well as more interesting.  The question remains, whether a print replica on screen is merely a transitional format or here to stay? Is it already being overtaken by the new social way of consuming media from a multitude of sources including blogs, twitter, facebook as well as news feeds from many publishers rather than a single source.

There are new apps which have cropped up with innovative new formats such as Flipboard, Zite, Pulse, Taptu and News.me which are presenting news, media and information in exciting new ways. Is this the future of publishing? Are publishers losing their monopolies to technology and the power of the internet? Big questions which I will leave for another post. What are your thoughts on the above? Share your ideas in the comments section below.

* I am is no longer involved or associated with The Age Digital Editions, Fairfax Media or Smedia. I sold my Smedia shares in 2010 to launch easyPublish, an independent consultancy and digital media services company. easyPublish specialises in digital publishing, SEO, CMS, internet marketing and ecommerce.