The rapid graying of the newspaper audience has huge and unpleasant implications for publishers. 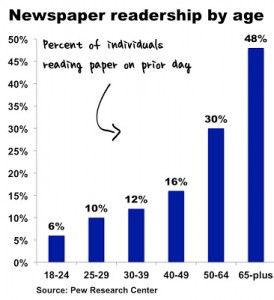 The mature skew of the audience is unappealing to most advertisers, who generally target individuals in the early life stages of forming households and raising children.  The older audience delivered by newspapers could reduce the sales potential for an industry that already has lost more than half of its advertising since hitting an all-time high of $49.4 billion in 2005.